the professor, the pet and the frightened rabbit 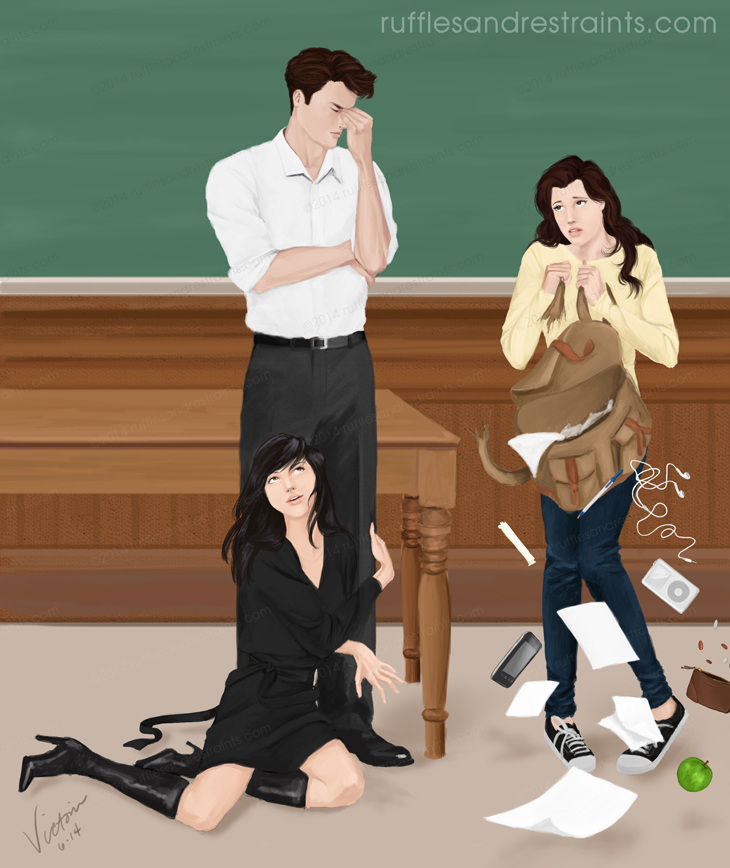 Recently I was given the opportunity to read the Gabriel’s Inferno Trilogy by Sylvain Reynard, due to the wonderful generosity of Nina Bocci (@ninabocci.) I began the first book weeks ago, but unfortunately events occurred which did not allow me much time for many things, including reading the first book in the series. But even in the short time that I had spent enjoying the book, I was pleasantly surprised by the humor sprinkled throughout each chapter. The character introductions and descriptions were also great–especially some of the nicknames!

So, even thought I really hadn’t gotten a chance to immerse myself more fully into the story, I couldn’t resist creating an illustration incorporating three of the characters from the first book. While the illo doesn’t depict an actual scene from Gabriel’s Inferno, this image popped into my head after reading a couple of character descriptions and experiences of the Professor, Julia and Christa.

I was tempted to create more literal characterizations of ‘the pet’ and ‘the frightened rabbit’ but decided not to turn them into actual animals. 😉 Instead, Christa assumes the pose of a pet cat rubbing against the Professor’s leg, as described in the book. I did decide to give her a tail of sorts–the sash on her dress trailing behind her. 😉

Meanwhile instead of turning Julia into a rabbit, I decided to capture a moment that did actually occur in the book, when her bag falls apart and the contents scatter everywhere. Her deep embarrassment is accompanied by fear when the Professor only becomes even more angry with her as her bag self-destructs when she arrives at his office. Showing how frightened and timid she was at that moment, Julia appears much like a frightened rabbit. 😉

I look forward to continuing on with the books where I left off. I had just reached a point where a few important bits of information were revealed to the reader, so I’m anxious to find out what happens next!

38 Responses to the professor, the pet and the frightened rabbit