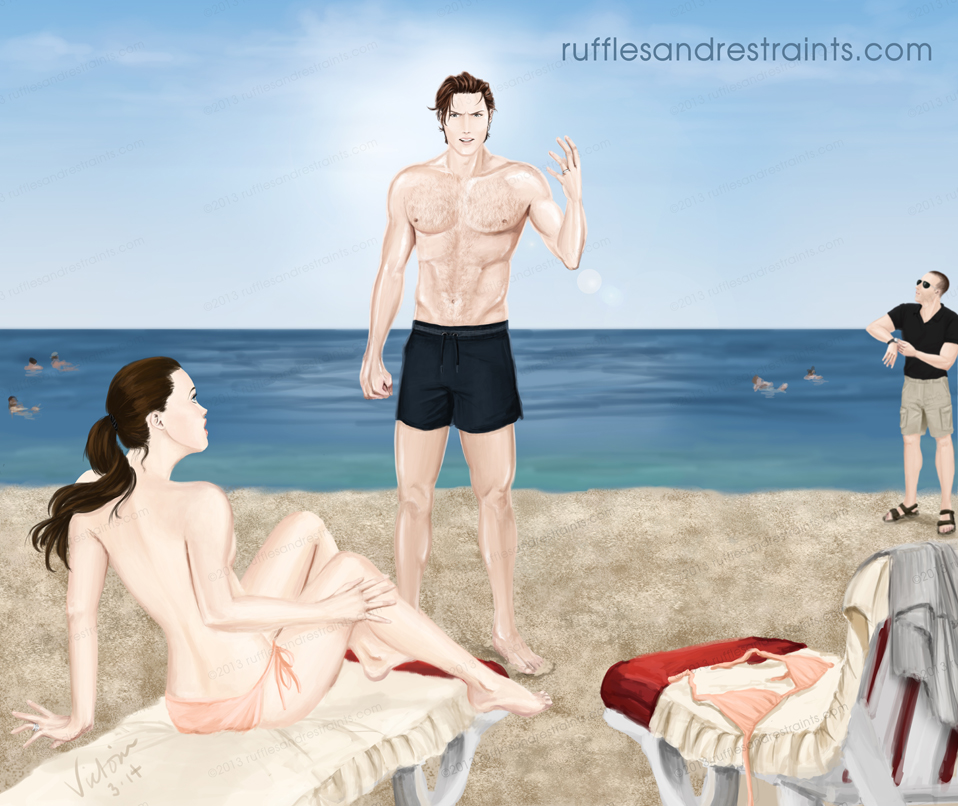 While enjoying a relaxing day at the beach in Monaco, leave it to Ana to land in a bit of hot water! Actually, it takes two to tango, and Christian is not exactly innocent during the events that lead up to a rather tense moment between the two of them. In this scene from Fifty Shades Freed, I decided to illustrate the moment when Christian is more than a little upset that Ana has managed to soak up a bit too much of the Monte Carlo sun. 😉

Ana is often testing the waters, so to speak, of just how much Christian can and will tolerate. At times it may be on purpose, at other times her actions inadvertently cause some conflicts. While on their honeymoon in the Mediterranean, it was a bit of both. But at the same time, Christian’s actions and reactions concerning Ana create situations that lead to showdowns between them. In effect, he is also learning and testing just how much she can and will tolerate.

While in Monaco, Christian is being overprotective as usual, which is really no surprise. But the wheels of conflict are set into motion when he sees to it that his new wife is shielded properly from the burning rays of the sun. This seemingly innocent act manages to set off a chain of events that has them both questioning the behavior of the other, and escalating the conflict and tension between them. So much so, that at one point Christian must protect himself from a flying hairbrush!

His tendency to tell Ana what is allowed and what is forbidden is just another form of control and dominance for Christian. While he is truly concerned with Ana’s safety and well-being, the constant requests (and orders) on what she can and cannot do can be seen as a carry-over of the role he’s had in his past encounters with his subs, and with the persona he assumes while he and Ana engage in the playroom at Escala. It is something he is accustomed to, and had chosen as a lifestyle. But unlike his experiences in the past, he had never encountered someone that would question his authority.

Unlike her behavior in the playroom (where she agrees to be bound by protocol) Ana does not let that carry over into her everyday life. She may consider what Christian tells her and take it upon advisement, but compliance is never a given. Her choice to refuse to carry out  or disregard his wishes also gives Ana a certain amount of power over him. She may feel quite intimidated by Christian a lot of times, but may not realize how much impact her independent behavior has on him and the dynamic of their relationship.

So it is inevitable that these differences would only serve to push each of them to test all sorts of boundaries as they grow to learn more about the other. Nobody had so blatantly challenged Christian quite like Ana. At one point he had even admitted that is one of the reason he fell in love with her! While he may have felt that he did not need any changes in his life, he certainly wasn’t expecting any the day Ana stumbled and fell into his office. But perhaps unconsciously he yearned to change the path his life was taking with respect to relationships and life outside of the business world.

I also wanted to add that although the illo is depicting a rather tense situation, I just couldn’t resist including Taylor to contribute a bit of levity to the situation. I imagined that he felt more than a little uncomfortable as Christian confronted Ana on the beach. On one hand, he had a job to do. On the other hand, while it was his duty to watch over the two of them, I’m sure he had a little trouble at that particular moment knowing just where to actually look! Hmmm…check the time or check the skies for any threatening aircraft full of paparazzi? How about both…simultaneously! 😉