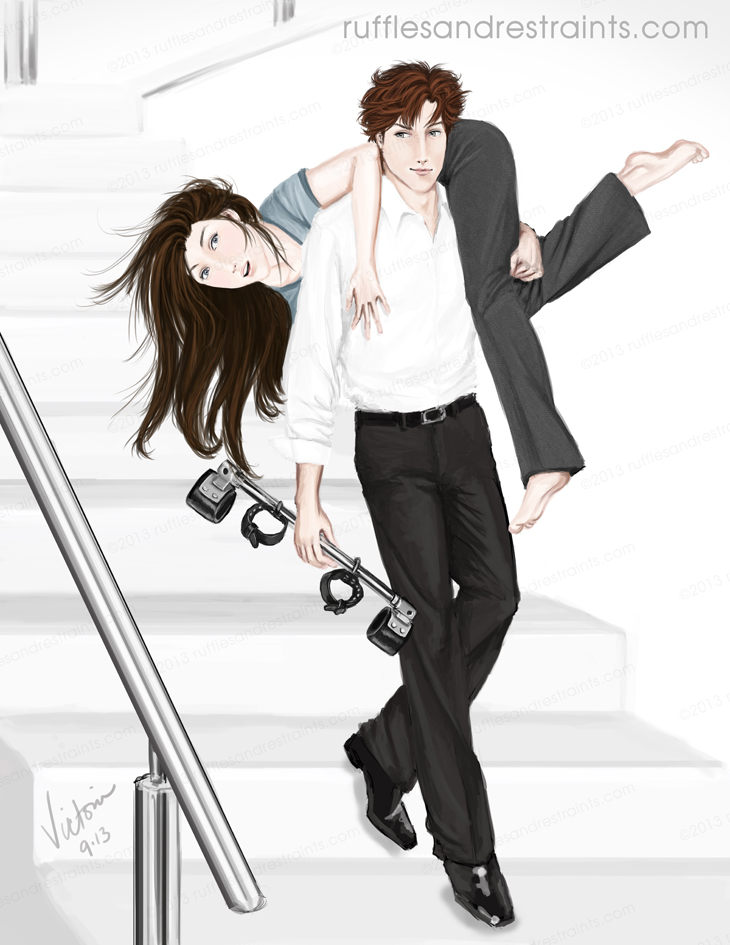 When I had completed my previous sketch capturing the moment when Christian carried Ana across the threshold at Escala, it occurred to me that there had been several moments where he had literally swept Ana off her feet! In particular, Christian seemed to favor the technique of hoisting Ana over his shoulder with the intention of engaging in yet more of his shenanigans…but also at times used in moments of frustration while engaged in conflict.

Fortunately, in this particular moment I chose to illustrate from Fifty Shades Darker, Christian decided to employ the shoulder carry so that he could deliver Ana as swiftly as possible from the stairs outside the playroom to his bedroom on the first floor of his penthouse.

But haste wasn’t the only reason Christian stopped things from progressing too far on the stairs and decided to move things to his room. From the moment Christian discovered Ana exploring the unlocked playroom on her own, until they eventually reached his bedroom, their usual roles had reversed.

Ana was uncharacteristically aggressive and confident, even while still in the playroom, but most definitely when she launched herself at Christian on the stairs. Perhaps her confidence stemmed from the deepening of their relationship and the night of revelations during Christian’s shocking breakdown that had occurred the night before. The more of himself he revealed to her, the more confident she became. She learned more about herself as well, which also helped build up her confidence and assertiveness–especially when it came to a certain Mr. Grey.

On the other hand, Christian was uncharacteristically hesitant about being aggressive. He was eager to move things downstairs due to his memories of the last time they had both been in the playroom. When Ana was bold enough to be willing to try out the spreader bar in the playroom, Christian finally explained that the last time they were both in the playroom, it resulted in Ana leaving him. The trauma he experienced from that event brought about a multitude of changes within him, which he was still processing. So, he felt the need to tread very softly. Normally, it was Ana who felt she must tread softly around Christian, trying to gauge his mood and frame of mind at any particular moment.

Unlike Ana, the more he discovered about himself, the less confident and more hesitant he became–especially when it came to a certain Miss Steele. Everything he used as a protection mechanism all his life no longer provided an emotional shield for Christian. He felt confusion at the effects Ana was having on him and that he no longer had control over things since she entered his life. He felt she held all the power. It was not a dynamic he was used to experiencing. But unbeknownst to Christian, he was actually becoming a much stronger person by slowly abandoning his long used self-preservation techniques.

Soon however, once they both reached his bedroom, the usual roles were back in place. Christian now comfortable and in control and Ana completely happy to follow his lead.

It was actually a good thing that Christian was surprisingly conservative that evening, and ended up being the one to end any hopes of some fun on the stairs (…much to Ana’s surprise and disappointment, I’m sure.) Soon after Christian made his way down the stairs carrying Ana and the spreader bar, they encountered Mrs. Jones as they crossed the hall! Had she ventured up the stairs for some reason, she would have been met with quite an eyeful to say the least! 😉

29 Responses to Taking the stairs