It’s that time of year again…Comic Con!!! Up until a few weeks ago, I thought for the first time in several years, I wasn’t going to be able to attend! 🙁 There had been a snafu with my pass (and I have heard also for many others) so I wasn’t able to get my 4-day pass! I tried the crazy online registration, but of course had no luck. But luckily last month I was able to secure a pass, but only for one day…but what a day it was!

…but I’ll save the best for last…bwahahaha! 😉

Let me start off by apologizing for the overall horrible quality of my photos! It wasn’t even a phone! It’s a bit difficult to try to snap photos quickly and steadily while lots of people are walking and rushing around you. 😉 With that warning in mind…here we go:

You can always tell when when you’re getting closer to the Convention Center…lots of wraps and other decorations on all the buildings in downtown San Diego, such as this: 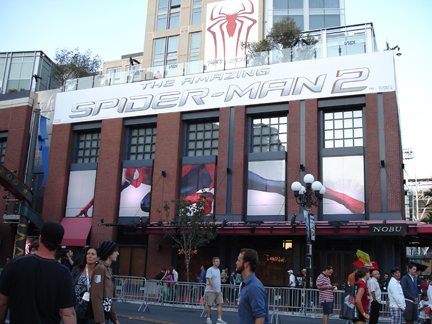 Inside, it seems as though some of the booths just keep getting bigger and bigger (and taller!) Here’s one massive booth promoting the upcoming TV series, “Black Sails.” Notice the poor guy tied to the mast. That looked sort of creepy! 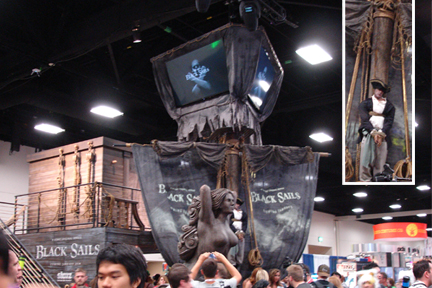 There was also a very large “Walking Dead” booth, complete with zombies trying to claw their way out of their chain link fence enclosure! (you could have your picture taken with a couple of other zombies in another area of the booth) 😉 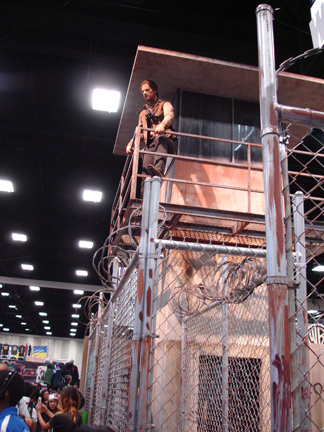 Also saw the Man of Steel several times, along with Catwoman and some turtles…

I love this shot! A giant Snoopy was in between taking photos with people, so I decided to snap a picture. He noticed, turned and posed just for me! I’ve always loved Snoopy… I made sure to thank him before saying good bye. 🙂 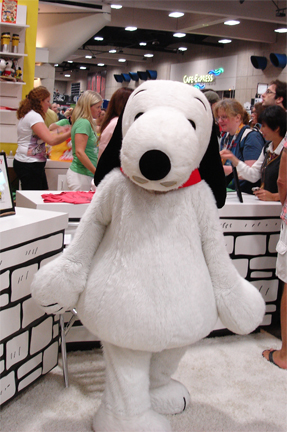 This Incredible Hulk was also incredibly HUGE! Towering over you when you stood under it! You’ll also notice Spidey photo bombing in the background! 😉 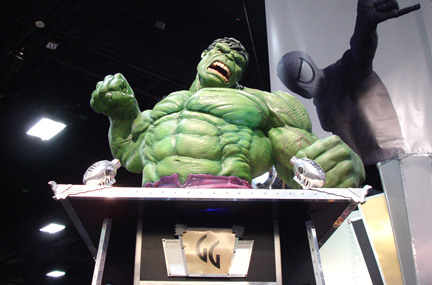 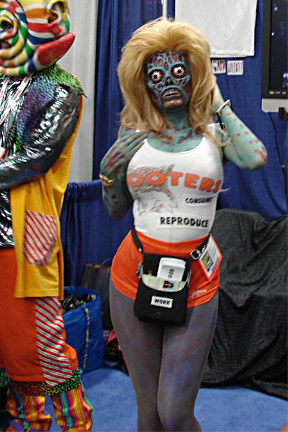 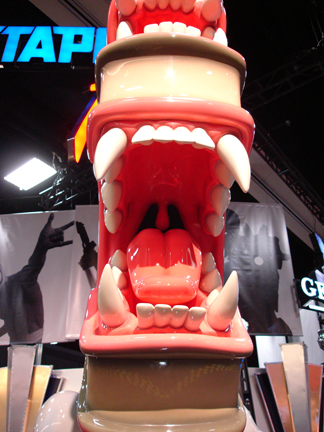 But then I found a wall of white Domos! I really love Domo too 😉 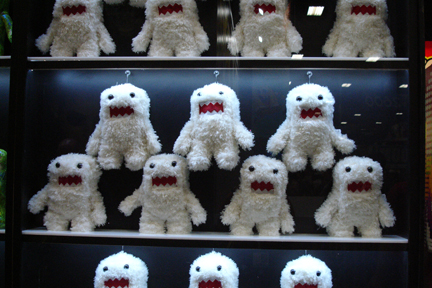 …and I took a shot of this booth, just because I found it funny, random and cute at the same time. 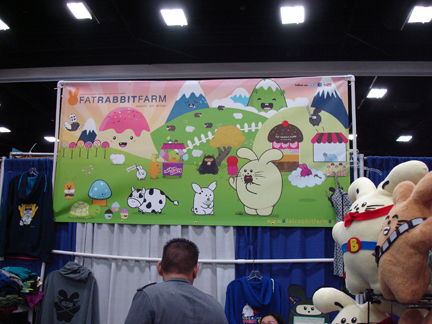 Of course I made certain that I stopped by the Vintage Books booth to pick up the newest Fifty Shades button! Last year you had to sort of be ‘in the know’ and ask about the button. This year they had a basket of them at their booth, along with other freebie pens and buttons!

Looks like supplies were already going fast by the time I made it to the booth! But there were still plenty to go around and I was able to pick up one for myself!

The night before the Con, I had seen tweets about Niall Leonard doing a signing for his book, Crusher. As most of you already know, he is also married to E L James! I had read samples from the book which I really enjoyed, and had heard nothing but good things about it. So, I made sure to jot down the booth number. The location was right next to the Vintage booth, but saw no signage about the signing. I asked a couple of people working the booth about it. They confirmed that he would be doing a signing, but not exactly sure where. My friends were getting a bit impatient, and it was still a while before the 1p signing, so we left to roam the convention floor. Later I dropped by the area again and asked a very nice man about the signing. He was extremely helpful and showed me where the signing would take place, and that the line would start “right here” and pointed down at my feet and told me I would be first in line! One of my friends was with me and was second! I was very happy and excited, since Mr. Leonard had tweeted that the first 3 people in line would have their names mentioned in the third Crusher book!

But things were about to get even more exciting! After the very helpful man walked away to tend to something else, I noticed that standing right in front of me was none other than E L James!

I was surprised to say the least! She was wearing a very cute white hat, but I heard her voice and was certain it was her. She was chatting with someone she knew, so I waited a bit, then got up some courage and very clumsily introduced myself. 😉

She was nothing but very sweet and very nice! I made it a point to ask if it was okay to create illustrations based on her books. I’d always really wondered. You never know if someone would rather their story be left to the reader’s imagination, or if they have any other objections over the representation of their work. She didn’t try to punch me or yell at me, so I was relieved. 😉 But in all seriousness, she was very kind and said that she had enjoyed them! I was very flattered (and relieved) hearing that! 😀

There was a flurry of activity going on, and soon she was signing some copies of her books at a nearby table. (not a formal signing, just several small stacks of books.) 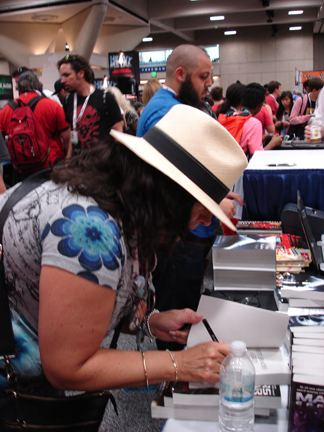 Just as quickly, suddenly I noticed that Niall Leonard was standing right next to me! So we began to chat. He is the friendliest person and so easy to talk to! I had mentioned that I had a bit of trouble confirming the location of his signing, and he told me that it was sort of an impromptu event. Then told me that the books would be signed freebies! Wow! Probably one of the best items I’ve ever received at SDCC…and that’s saying a lot! 🙂 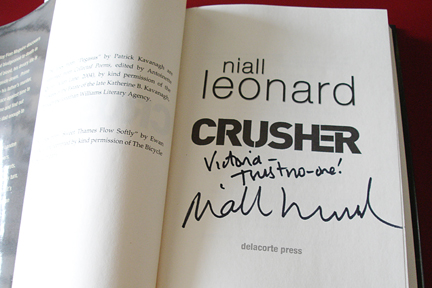 He spent a few minutes chatting with me, then was whisked away to his place at the signing table! As promised, he took down my name on a Post-It Note and will use it in the book! We chatted a bit about which name to use…so be sure to buy a copy of the third installment of Crusher to see what Victoria’s fate will be!

Here’s a quick shot I took of Niall Leonard as he was signing a book for me! 😀 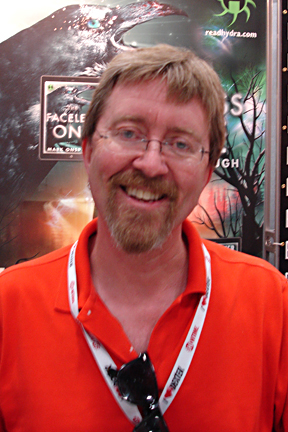 …and a shot of E L James, this time without the hat! 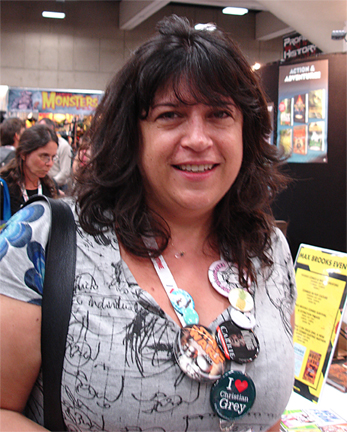 I cannot say enough about the two of them! They are both so friendly, pleasant and fun to talk with! It really made my day at the Con complete!

Oh, here’s a photo (albeit blurry) that my friend snapped of E L James and I… 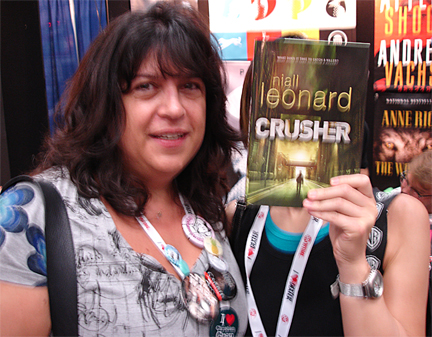 …and my signed copy of Crusher! ;D

I had a fantastic time at the Con this year! In addition to everything I’ve already mentioned, I also loved meeting and talking with lots of talented artists I’ve followed for years, experiencing total sensory overload and receiving lots of inspiration from all the creativity that encompasses the San Diego Comic Con! I cannot wait until next year! 😀