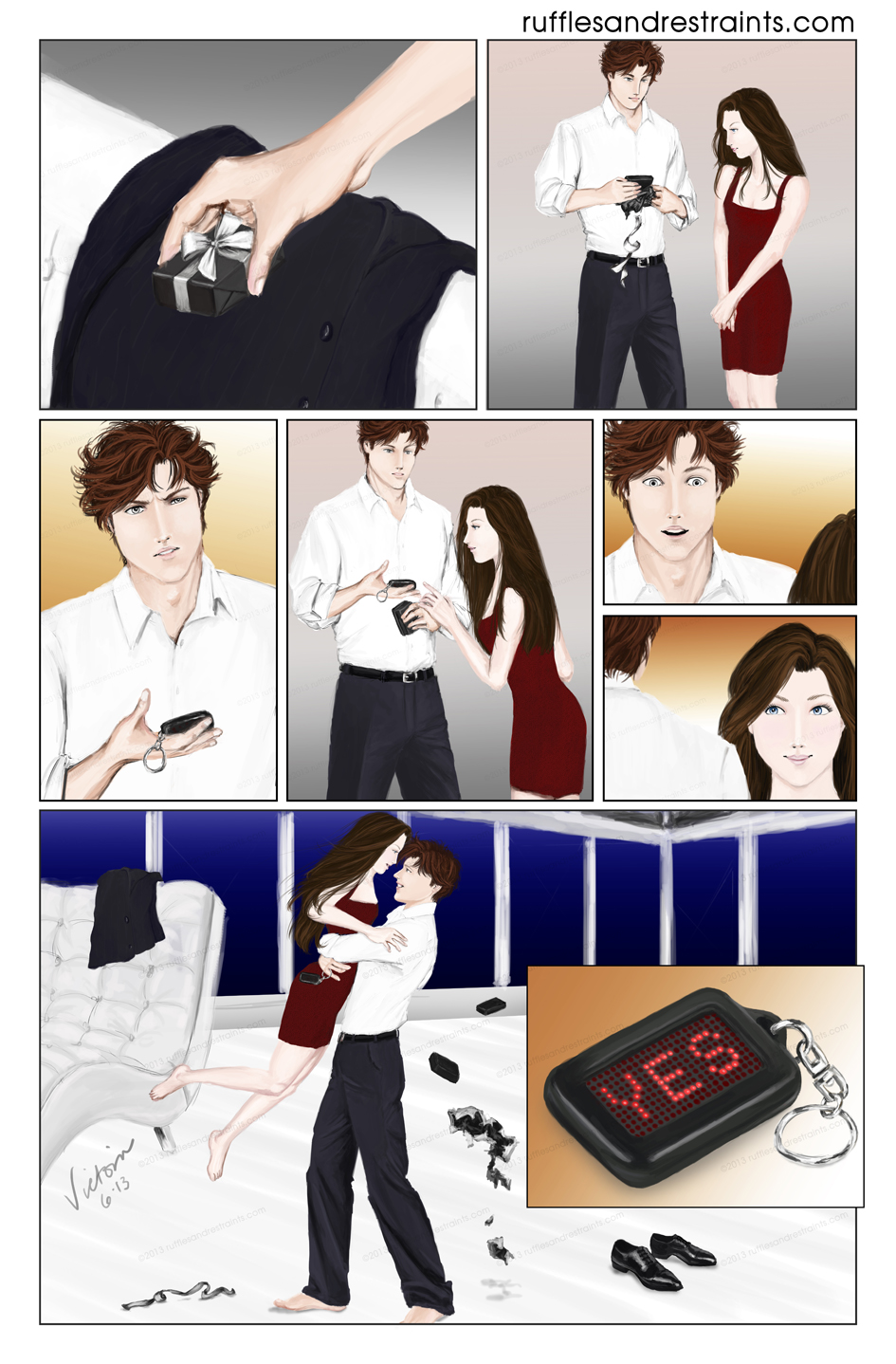 Up until now, I’d represented a particular scene or moment from the Fifty Shades Trilogy with a single illustration. But for this scene–taken from Fifty Shades Darker–I decided that a single illustration would just not do it justice. So I tried a little something different. While there was some dialogue in this scene, I decided to recreate the moment without words. Well, there is actually one very important word in the piece… 😉

Moments leading up to this portion of Fifty Shades Darker were very tense, but also a bit humorous at the same time. Christian finally arrived back home to find everyone waiting anxiously, hoping desperately for his return. He was completely unaware that everyone was so worried and concerned. It was a bit amusing that he was so truly confused by the way everyone was acting. He was completely caught off-guard! But the idea soon began to sink in just how much his family loved him after learning of the fear they had been experiencing while he was missing, and seeing the elation and relief they showed when he stood at the entrance to the great room at Escala. But this was not the only realization he would experience that night.

Little did Christian know that he would be caught completely off-guard again once he and Ana had the opportunity to be alone and enjoy their reunion. It also just happened to be the first few minutes of Christian’s birthday…

I thought it would be fun to capture what happens next. 😉

When everyone had gone, and the two of them had a bit of time to themselves, they also had time to process all that had gone on that day. Christian came to a lot of realizations that evening. Although seemingly confident on the outside, inside he is extremely the opposite and quite self-loathing and lacking self-esteem. When it comes to relationships with others, he never felt worthy or feared that he would eventually be abandoned. But witnessing just how concerned everyone was about him–and Grace’s uncharacteristic display of emotion upon his return–made him finally realize that maybe he was wrong. That maybe he really is loved. Upon opening his birthday gift from Ana, that realization was confirmed even further for Christian. When Ana finally said ‘yes’ and accepted his marriage proposal via her creative birthday gift, it was the definitive realization that she truly loved him (even though Ana had already declared her love for him on several occasions.) But for Christian, this was the only way that it truly became real to him.

While this was understandably cause for much excitement, it also gave him deep feelings of relief at the same time. By agreeing to become his wife, it was the ultimate confirmation for Christian, providing the most reassurance to him. By accepting the proposal, he felt that it showed that Ana truly did love him as much as he loved her, that she would never leave him, and be with him always.

Ana also experienced feelings of deep relief and shared some similarities with what Christian was feeling. Of course she felt relief knowing that Christian was safe and back in her arms. But earlier that evening she touched on thoughts of confronting what it would be like if she had lost him forever. Contemplating the harsh reality that she may never see him again had a strong impact on her. The potential to make a choice about their relationship was no longer an option. It helped her realize just how strongly she felt for him and that all questions she had in the past about their relationship, and how strong it could be, were no longer a concern. In a sense, the threat of losing him that night helped Ana come to her own definitive realization that she truly belonged with Christian, and that even all the questions and feeling a lack of confidence in the future strength of their relationship, were no longer an issue to her. True, she had already made a choice when she gave Christian his birthday gift early, the night they met with Dr. Flynn together. But she now had no doubt in her mind that she made the right decision. She was certain that there was no denying they should be together, no matter what their differences.

So, that evening both Christian and Ana became somewhat enlightened by what could have potentially kept them apart forever. But on a much happier note, both experienced yet another first with each other by becoming engaged! Creating yet another dynamic to the journey they take in their relationship together!