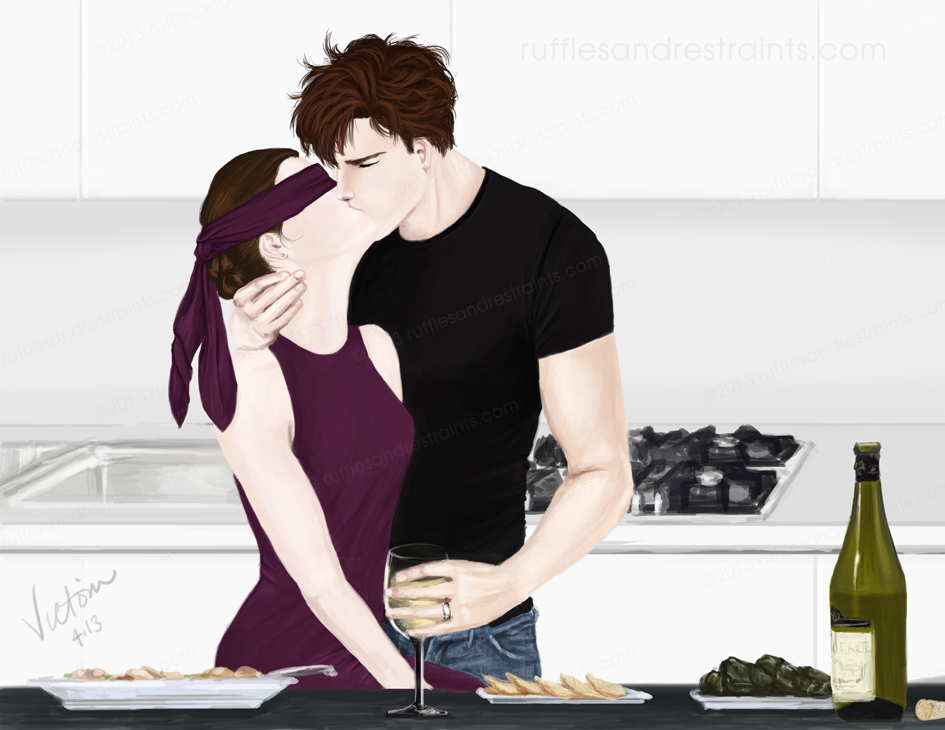 This particular scene from Fifty Shades Freed is rarely if ever mentioned whenever I hear or read about favorite scenes from the books, but I find it to be one of the most sensual in the entire trilogy.

While Christian employs the same beverage serving techniques in Fifty Shades of Grey as the two of them worked out a mutually agreed upon definition of the word, “nice,” I decided to attempt to capture the moment that transpired in Fifty Shades Freed. Both scenes containted theatrics that were of a very sensual nature, but this kitchen scene also seemed to have much deeper emotional reasons behind it for Christian.

Circumstances and events changed so quickly during this section of the last book of the trilogy, that Christian even seemed to be grappling with it himself. He is at his mercurial best as he goes from being extremely angry at Ana for exercising her woman’s prerogative to change her mind and go out for a drink (or two) with Kate, to being concerned she hasn’t eaten, to turning eating into a very sensual experience, to turning that sensuality into teasing her in the playroom which quickly turns into Christian’s form of punishment by withholding full pleasure to Ana. At this point he becomes so carried away with his feelings of helplessness and frustration that Ana must resort to using a safe word which abruptly makes him realize he had gone much too far.

But getting back to the kitchen…

When putting all these events together, it seems as though Christian’s wide gamut of emotions and reactions during this portion of the book was a culmination of the effect that his tragic childhood had on him. I may be reading a bit too much into it all, but when he insisted on feeding Ana, he was showering her with a sort of maternal care that he never received from his birth mother, and that he haltingly allowed his adoptive mother to give him. You could go as far as to say that he literally fed Ana the Sancerre much like a mother bird feeds its young, when he  passed the wine from his mouth to hers.

Christian had never cared for, nor loved another person as he loved Ana. The unfortunate and tragic circumstances that influenced his childhood also had a major influence as to how he developed emotionally. This in turn also effected how he viewed and participated in relationships with others. He never received such concern or care from his birth mother, so he overcompensated when showing his affection and care for Ana.

Because he felt so helpless as a child and was starved for emotional connection with his birth mother, this effected how he interacted with Ana. This manifested itself in the way he was always so overly concerned with her interests and safety. Christian seemed to equate keeping her safe from harm with showing affection–something he had been unable to do for his mother. However, if he felt that Ana had unnecessarily exposed herself to danger, or didn’t follow his instructions, his first inclination was to punish her for it. To him, the punishment was also showing a form of affection–to stress that you must follow his rules to keep safe. Ana soon experienced just this in the playroom soon after her meal was finished in the kitchen. This need to control, either before or after conflict, was all part of his coping mechanism.

But not everything about this scene was quite so intense. There were also some lighter moments as well. While Christian set out to make this a very sensual experience and to build up anticipation (one of his favorite tactics) the scene was also great in that it included a bit of humor. Although Christian is quite accomplished at many things, a master in the kitchen he is not. Unlike the graceful ease he typically exhibits, in the kitchen he is reduced to clumsiness and swearing! 😉 Discovering that Christian isn’t perfect at all things requiring skill made it that much more charming as he tried his best to serve Ana a delicious meal in his own unique way.

As a side note: when I came upon this moment in Fifty Shades Freed, it immediately reminded me of a scene in a movie called “Indochine” that I caught on television several years ago. The male lead was desperately trying to revive the female lead, if I recall correctly. So, he filled his mouth with water and tried to pass it from his mouth to hers. At the time I was quite young and all I could think at first was, “Ew!” but then thought it was kind  of romantic in a tragic and bittersweet sort of way. 😉 It was definitely not a flowery or romantic scene, but quite intense. So when I read about the seductive way Christian served the Sancerre to Ana, from then on, it gave me a much more pleasant picture in my head. 🙂