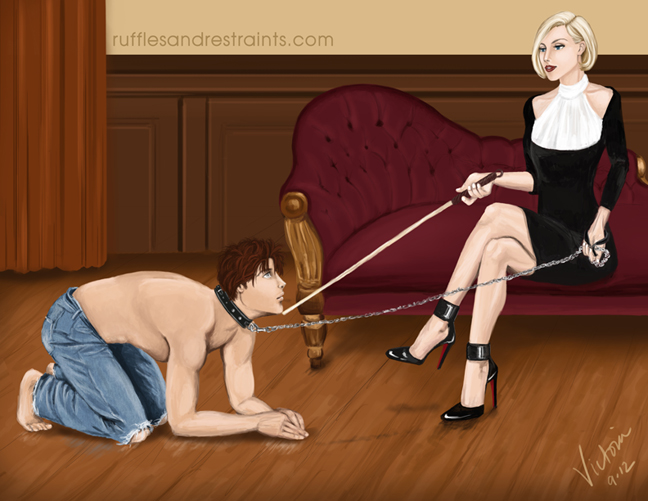 So, I tried something a little  different this time…I had been dying to do an illustration based on Fifty Shades of Grey involving Christian Grey and Elena Lincoln back when he was her submissive. However, such a scene was never described in the books. A couple of times Christian mentioned things between he and Elena, but nothing was specific.

I was wary of trying to create anything between these two, but it kept popping into my head. I thought it might be fun, but wasn’t sure how others would like it. I decided on this particular year since it meant that Christian was legally an adult by that time, and it also eliminated some of the ‘ick’ factor. 😉

For Christian, at first I wasn’t sure if he should be in ripped jeans similar to the ones he wears in his own playroom. But when I was trying to decide what to put him in, I thought an interesting backstory would be that he had worn the same jeans for a significant amount of time that he was with Elena. Due to their ‘activities’ this caused lots of wear on the jeans as well as the ripped knees. Taking it a bit further, I supposed that maybe Christian chose to wear them as his own playroom ‘uniform’ sort of symbolizing his transition from submissive to dominant.

Okay, so I admit I have an active imagination. As I said, I wasn’t expecting to think about  possible backstories when I began, so it was a fun surprise as I worked on the illustration!

Oh, by the way, as I said before I was quite wary of attempting this piece. After I had finished the last illustration I was trying to figure out what to do next, but kept pushing the Christian/Elena idea to the back of my mind. But one day I was unexpectedly given a little encouragement by a couple of very sweet people on Twitter! Silvia (@Silvia_g1) and Christie (@cabingurl77) had asked me if I was working on the next piece and wondered what it would be. I don’t know why, but I mentioned I had an idea, but was a bit worried about trying it. They were very sweet and kept encouraging me to go for it. During our gabfest, even the 50 Shades Movie Fansite (@50ShadesMontage) offered some encouragement at one point! So, what can I say, I let them talk me into it. hahaha #eep

I hope everyone enjoys this piece, but let me go on the record by saying that if you abhor this illustration, then it’s all their fault! 😉