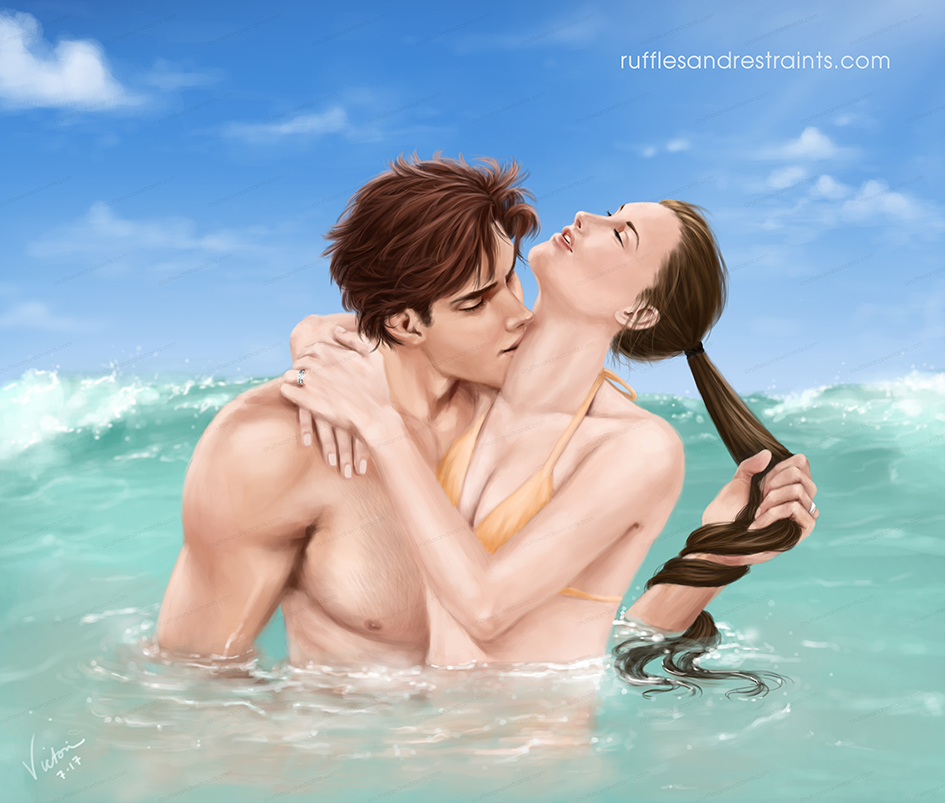 Married life seems to agree with Christian Grey! In Fifty Shades Freed, the newlywed and his new bride enjoy their honeymoon on the beaches of Monte Carlo. A rather playful Christian emerges, and decides to have some fun teasing Ana. I thought I would attempt to create an illo when things seemed to be heating up the ocean waters… 😉

Ana is more than willing to experience a bit of romance at sea, even with a few sunbathers as spectators watching from shore.😲 Normally, she is definitely not one to cause a spectacle…but being with Christian seems to have that effect on her. 😉

However, he had no intention of engaging in any sort of hanky panky at that moment, much to Ana’s disappointment. Instead, he leaves her high and dry (well, figuratively speaking, that is) as he follows up the steamy kiss with an acrobatic plunge into the water…then mischievously swims away!

While Ana found this change in mood as silly and amusing as Christian, she still vowed to get him back for tricking her.

Swimming back to shore, she ponders a good revenge. Upon arriving back at the sun loungers in the sand, she makes sure to lie face down and then removes her bikini top. (remembering that just moments earlier, Christian had made it quite clear that he did not approve of Ana going topless on the beach–even though so many other women were doing it.)

But unfortunately, Ana’s attempt at lighthearted revenge backfires when she dozes off in the warm sun. Things don’t go quite as she planned, and is soon confronted by Christian…who is no longer so playful and happy…

A couple of years ago, I actually attempted an illo of what came next… 😉 You can check out ‘bikini blunder’ HERE.

4 Responses to swept away