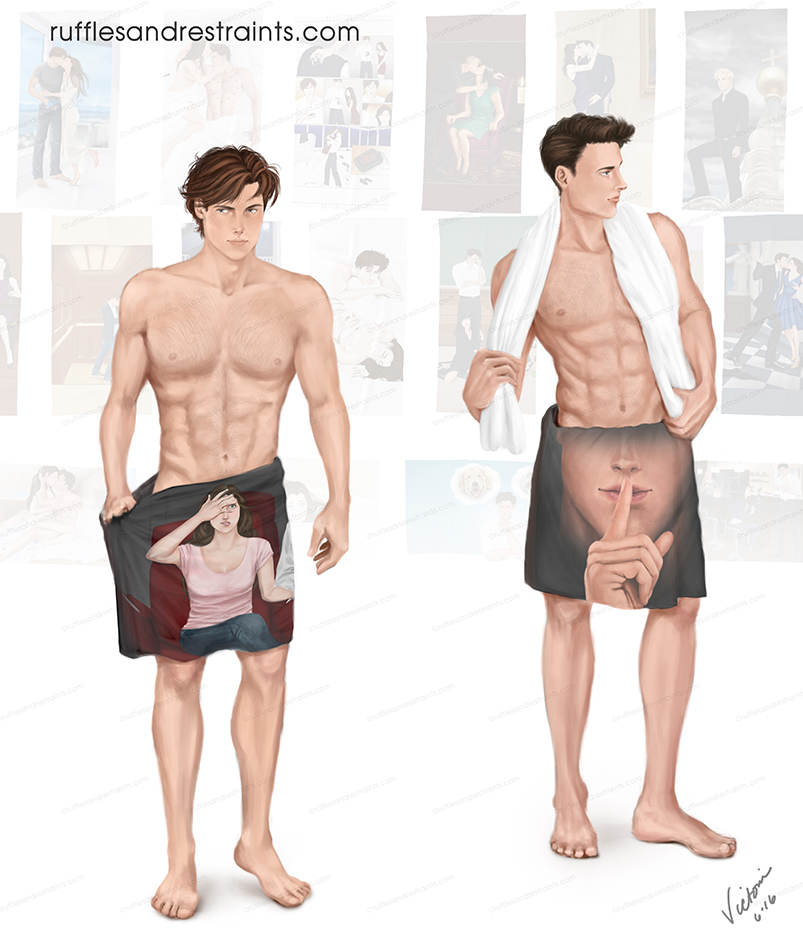 Looks like we’ve walked in on Christian and Gabriel while both are very casually dressed, to say the least! 😉

But actually, I’ve enlisted the two of them for a bit of shameless self-promotion. Hope you don’t mind, but I thought this silly illo would be a fun way to tell you all about some new items in my Society6 shop!

My two lovely models have tastefully wrapped themselves in selections of newly added towels–which include beach towels and hand and bath towels as well! (…now the illo begins to make sense, right?) ;D

Over the past few weeks I began adapting my illos to the new towel designs and quietly added them to my inventory of items as I completed them. A few of you had a very sharp eye and noticed the new pieces before I could announce them!

I’ve already heard fantastic feedback and received wonderful photos on Twitter from some of you that snapped up the towels soon after they were added to my shop and made available. I was very pleased to hear that they are all happy with their items, and some ordered even more! I want to send out a huge “thank you” to all those that spotted and purchased the new additions so quickly! 😀

A few weeks back, throw blankets and wall tapestries were also added to the item lineup. However, many had expressed frustration that there were only a few items listed. But I am very happy to say that over the past few weeks I worked very hard to create special versions of every illo in order to make them all available as well!

While I was at it, I tried to make each illo design available in as many items as possible. So, if it’s been a while since you’ve stopped into my shop–or even if it’s your first time visiting–I hope you have a lot of fun taking a look at the new and much wider variety of designs and products, and maybe something special will catch your eye! 🙂

One Response to all wrapped up