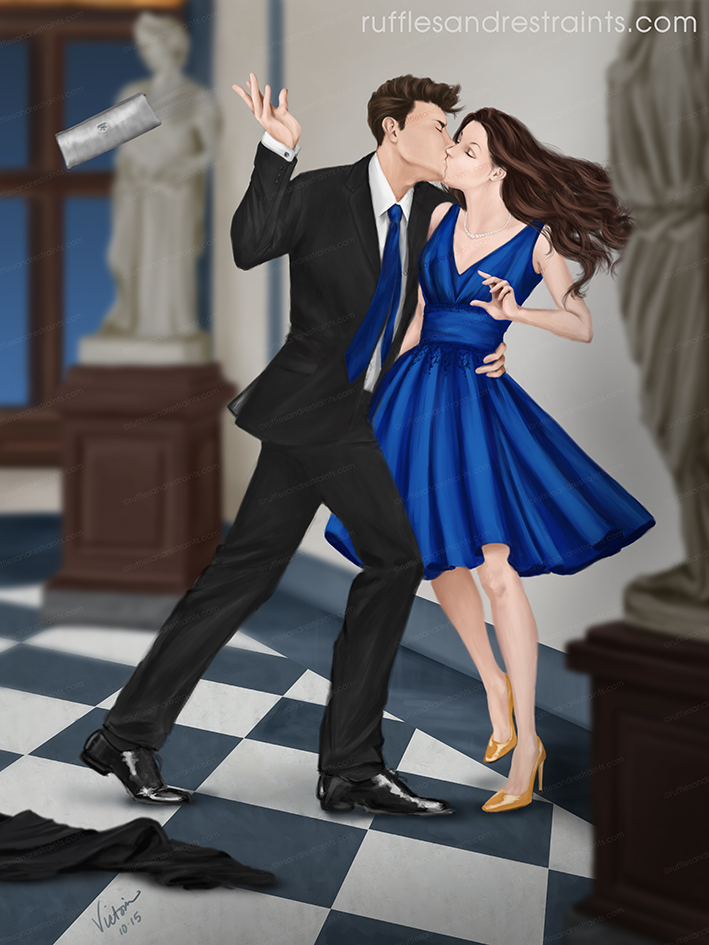 Just hours before, it seemed as if there was no question as to the intentions and devotion Gabriel and Julia had for each other. But in Gabriel’s Rapture by Sylvain Reynard, circumstances took a turn for the pair the next evening at the Uffizi Gallery Museum. I thought I’d attempt to depict a moment from the events that transpired that night.

Soon after completing a well-received presentation (save for one audience member), Gabriel was in high demand with his presence, which left Julia on her own to wander the gallery.

However, the sight of her enjoying the artworks unescorted did not go unrecognized for long. Julia found herself dealing with some unwanted attention. But, just in the nick of time, she was reunited (rather passionately) with her Gabriel. It seemed as though all would be well, but this small incident caused both of them to question their standing with one another.

Even though they seemed to be embarking on a serious and committed relationship, in reality it was still quite early. So doubts and concerns are bound to creep in, no matter how much reassurance each provided the other. But that evening in the museum, their pasts–but for different reasons–seemed to have caused them to question the intentions of the other.

Gabriel had doubts about Julia, when he mistook her usual politeness as flirtation with another man. While in years past, such playful interaction with strangers was a frequent tool in his own arsenal. But in Julia’s case, it did not fit her character at all.

Julia felt a bit of unease at Gabriel’s unexpected and seemingly unrestrained behavior in the corridor corner. She couldn’t help comparing it to what she’d seen in a past relationship and reluctantly wondered if Gabriel would differ in his self-restraint.

They were both unnecessarily projecting behaviors onto the other, that deep down they knew were ridiculous, or at the very least, highly improbable.

But while the past heavily influenced the situation that night in the Uffizi, their hopes for their future helped lift them out of conflict and forward in their journey together.