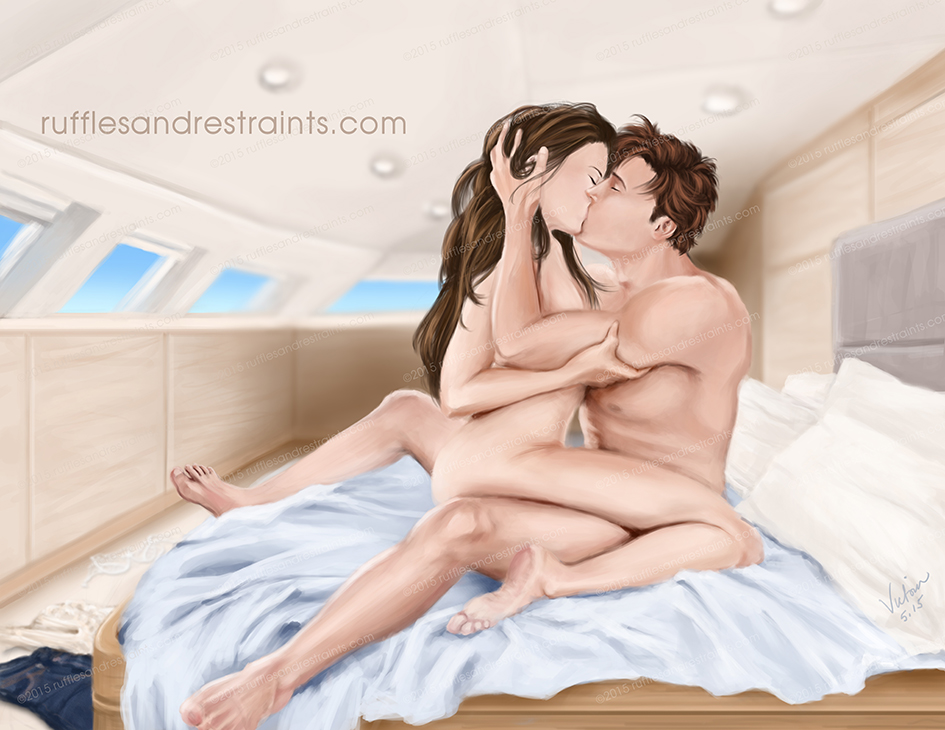 After an unplanned and hastily arranged stay at the Fairmont Olympic in Fifty Shades Darker, Christian later surprises Ana with outing on his catamaran–The Grace. While setting sail, he gives her a tour…and they just happen to find themselves spending a bit more time exploring the master cabin. 😉 I thought I’d attempt an illo during a moment when both of them are enjoying the luxe surroundings while at sea.

A quite tumultuous few hours had taken place for the both of them. But now that they were sailing the waters of Puget Sound, things were calmer and allowed them to reflect a bit on a variety of developments and discoveries. Not only about events but about each other as well.

Emotional declarations and discoveries made by Christian and Ana gave them more strength and bravery in their intimacy and their relationship in general. At one point, both of them even noted it to the other while in the midst of enjoying the plush master cabin. 😉 Their individual strengths had actually helped the other with weaknesses they were experiencing in their interactions with one another.

It’s no doubt that Christian’s traumatic childhood led to his very guarded emotional state. While Ana is quite open emotionally and has no problem expressing her thoughts, opinions and feelings. At first he most likely found it intriguing, since he had never encountered a potential partner that behaved this way. But as he became more attached to Ana, nearly lost her, then reunited with her–clear communication became of utmost importance to prevent another misunderstanding having the potential to tear them apart. So, Christian mustered the strength to open up to Ana more and more about his past. He seemed to allow himself to feel more emotions due to his feelings for Ana and became less guarded and more gentle and tender. It was no longer just a ‘session’ with a sub, as it was in the past.

Whether it being with any of his partners in the past or with Ana, Christian never had problems showing physical intimacy. However, Ana’s inexperience made her much less forthcoming in that department. The confidence and knowledge Christian displayed also quite unnerved her, which caused her to be even more timid. But as Christian became more emotionally available to her and she learned more about him, it gave her more confidence. She better understood him and the reasons for his reactions in certain situations. So she became less intimidated by Christian’s occasional unpredictability and mercurial nature. This allowed her to show more boldness about what she wanted when being intimate with Christian, and at times even taking control of the situation. (although it excites Christian so much that it often led to him taking over from there) 😉

Their moment shared together while on board The Grace was yet another instance showing the progression of their relationship, and how much each was learning from the other.

But this isn’t the only time that Christian and Ana find themselves at sea. In their further adventures, things get a bit interesting in a variety of ways…and turns out to be a very interesting voyage for them both. 😉

26 Responses to adventures at sea