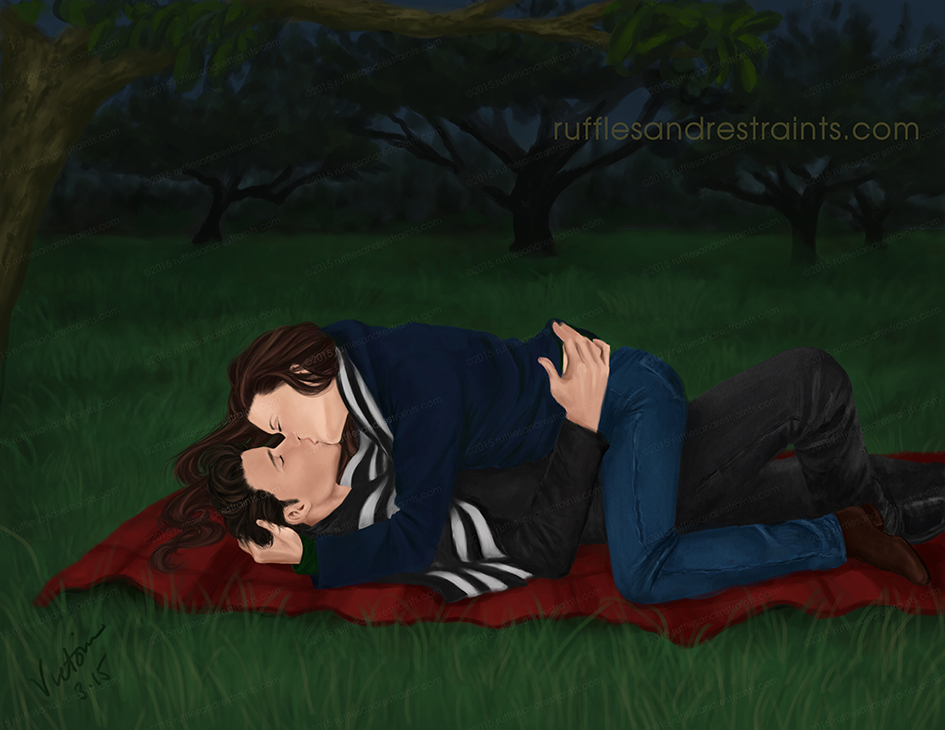 A trip to an apple orchard is featured a couple of times in the first book of the Gabriel’s Inferno trilogy by Sylvain Reynard. But while it is the same grassy clearing that Julia and Gabriel had visited years before, it seemed different somehow, even though nothing had really changed…to their surroundings at least. I decided to attempt to capture a moment from their second visit in an illo!

On the occasion of their second clandestine visit to the orchard one cool November evening, Julia immediately noted to herself that it seemed much smaller and less impressive than the first time she had been there. Perhaps it was due to the fact that Julia was somewhat swept up in a fantasy of sorts. Somehow she had found herself alone with a very gentle and attentive Gabriel.

Actually, their first visit to the orchard together was somewhat removed from reality for both of them, albeit in their own separate ways. Julia was filled with excitement yet was somewhat anxious. It was almost as if she were in a dream. While Gabriel was extremely inebriated, so obviously his perceptions were quite clouded as he drifted in and out of lucidity. But both enjoyed their time together (even though only one of them would clearly remember the encounter after that night.)

However, on their second visit, it was almost as if the trip was made in order to duplicate the moment so that both of them would have the same pleasant memory of it together. While their surroundings didn’t seem as dazzling, the actual intimate moments shared by Julia and Gabriel was rooted in reality this time. So it still provided a magical feeling, even if the orchard did not.

The two of them were fortunate enough to relive a special moment from their past in a special way that evening. Unfortunately, another part of Julia’s past also emerges during her Thanksgiving visit back home. But while it may be quite unpleasant (to say the least!) it actually brings Julia and Gabriel even closer.

12 Responses to the same…but different