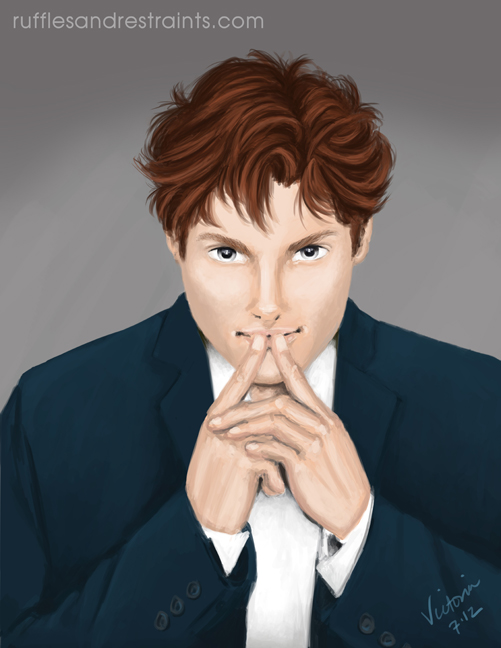 When I started up this latest Fifty Shades of Grey inspired Skillo™ (my term for a cross between a sketch and a finished, color illustration) I named the file “Contemplating Christian” because that was what first came to mind (and I needed a file name.) After thinking about it, this could have a couple of interpretations. First, it is literally a drawing of Christian contemplating something, as he often does. But it could also be interpreted as something else…such as Ana contemplating Christian–as she often does!

A few times in the book he would be digesting some type of information and tend to bring a finger up to his lips in thought. One particular moment that made me try this sketch was the scene in the book where Ana Steele meets up with Christian Grey at the Heathman for dinner to discuss the contract. In that scene, he leaned forward with elbows on the table and had his fingers steepled in front of his mouth. As Ana watched Christian, she noted that his gray eyes were “alive with some unreadable emotion.”

I don’t know why this particular moment stuck in my head, but thought it would be fun to try to capture in a drawing. Again, I know everyone has their own idea in their head of how every character would look, and it’s nearly impossible to capture how Christian would look in particular, but I gave it a go. I hope you enjoy it!