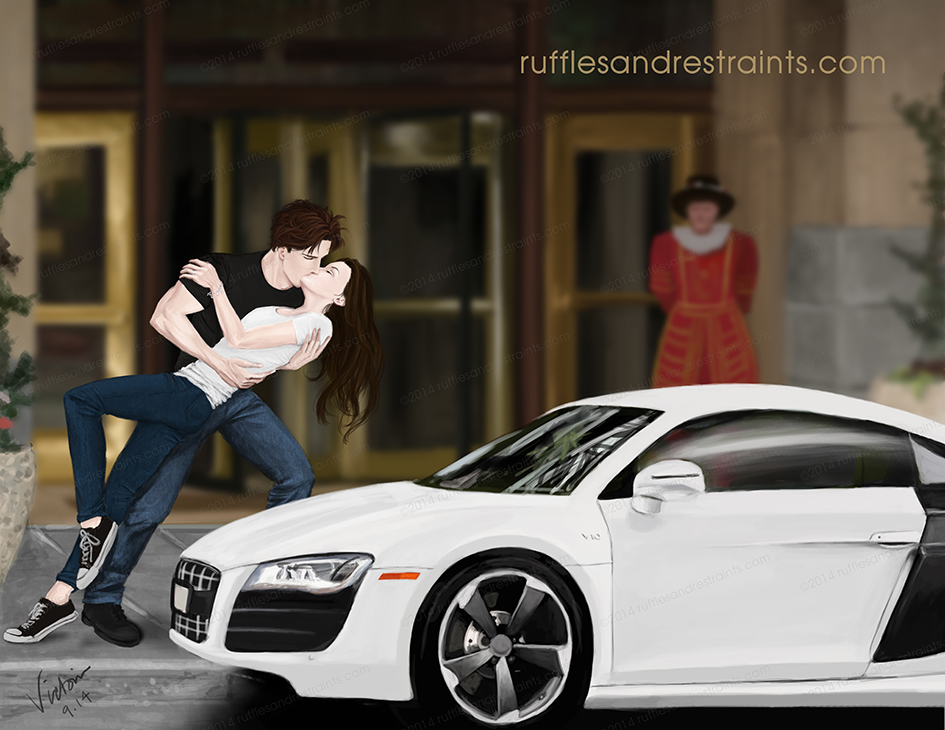 Since September 10 is Ana’s birthday, I thought I would celebrate by creating a new illo based on a scene from Fifty Shades Freed! Unfortunately for Ana, the events surrounding her birthday were not exactly the best…but fortunately for her, Christian provided several special surprises to attempt to make her birthday very special.

It also happened to be Ana’s first birthday with Christian as his new bride. So, of course he would be sure to make it all the more eventful. The fact that the newlyweds did not happen to be at home in Seattle posed no problems for one Mr. Grey. He would simply bring the celebration to where they were in Portland (in more ways than one, as she learns later that evening…) 😉

After Ana receives her first very thoughtful gift of the charm bracelet from Christian, she receives another big surprise as they leave the Heathman that morning. Luckily, his second birthday gift to Ana was very mobile and very transportable to their location, so delivery to the hotel was quite easy…thanks in large part to Taylor! Needless to say, Ana was not expecting to receive an Audi R8, even though she had once joked to Christian that he could buy a white one for her birthday. However it really should be no shock to anyone, since he would not give a second thought to giving such an extravagant item as a gift. Especially when it came to Ana.

But what occurs after he presents the new car to her would probably shock anyone, and certainly shocked Ana! While she is overcome with excitement upon receiving the Audi, Ana receives an extra surprise by Christian’s sudden PDA (public display of affection) when he dipped her back and kissed her as they stood outside the hotel! Certainly not something you would normally expect from him, to be sure. Even Ana made a mental note as it occurred. But I’m sure it also made the gift even more special.

The array of special surprises and effort he put forth were also Christian’s attempt to help Ana deal with all the stress she was experiencing concerning her injured father. Normally when in times of stress or adversity, he and Ana would always end up getting *ahem* physical. But even Ana was a bit surprised that he hadn’t initiated anything while in Portland. Obviously showing respect for his wife, he knew that although he deeply desired her, it was not the appropriate time. Even Ana had to admit to herself that all the stress and concern she was experiencing was too all-encompassing to deal with anything else.

This showed that he was learning compassion for others. Something that Ana had pondered more than once in the past, and that Christian most definitely did not think he possessed nor had the ability to possess. But as with many other transformations he underwent since meeting Ana, becoming much more aware of the feelings of others was one of them.

Along with his showing of compassion, during this bittersweet time with Ana, he also seemed to show signs of his increasing awareness of the importance of family. While he appreciated and cared for his family and haltingly accepted that they felt the same, Christian was slowly accepting their love..and allowing himself to reach out to family, and even those he now considered friends. This became even more evident later that evening for Ana’s birthday dinner… 😉