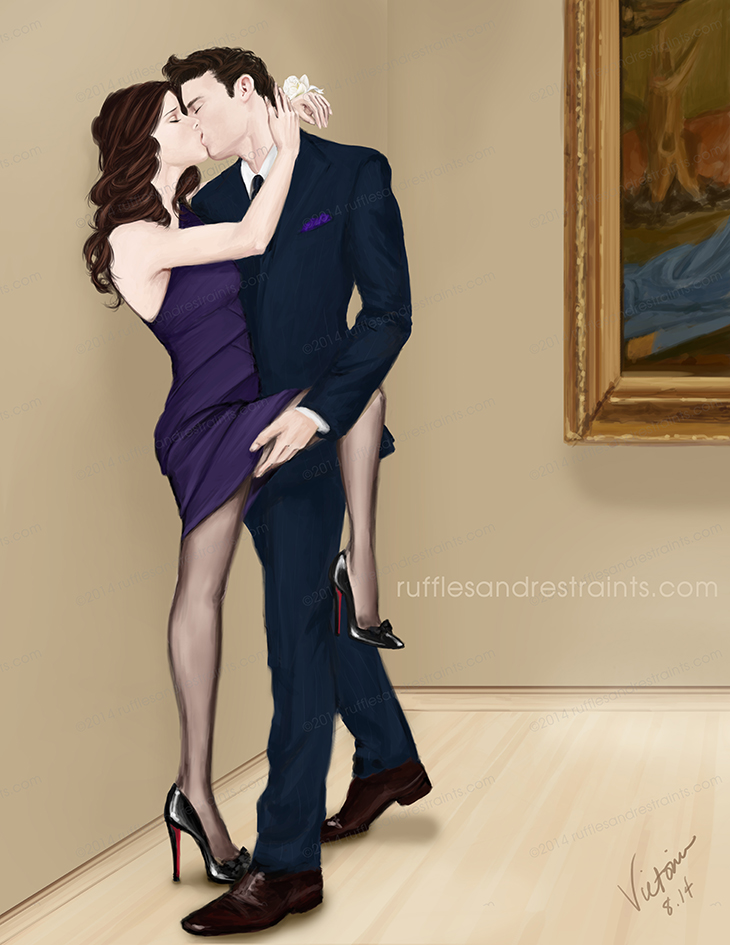 When Gabriel learns Julia’s birthday is quickly approaching, he is quite intent on making it a very special occasion. So, in Gabriel’s Inferno by Sylvain Reynard, the title character surprises the birthday girl with a special visit to the Royal Ontario Museum.

While admiring Fra Filippo Lippi’s painting, “Madonna with the child and Two Angels,” Julia and Gabriel learn that they share a passion for that particular painting. Suddenly, they find themselves sharing another type of passion together in the deserted museum gallery. 😉 I thought I would attempt to illustrate the moment when emotions overwhelm the both of them.

After finally allowing themselves to share each others company for a few short days, fear of discovery of their ‘fraternization’ leads them to decide that discretion is a necessity. So, it was back to the usual dynamic of Professor and student–at least in appearances–while in classes or in public. After their breakthrough of discovery the weekend before, this temporary parting of ways was agonizing to both of them. But when Gabriel learns of Julia’s upcoming birthday, it seemed a fitting occasion to reconnect, even if it involved a bit of careful planning. Not that Gabriel minded, since it helped to show Julia just how important she now was to him.

Since it was a new journey both of them were taking, neither were sure of themselves at times. For Gabriel, he often alternates between making grand gestures and being quite cautious and gentle with Julia. His birthday surprise was a perfect combination of both.

It was the ideal setting for their first official date. They were able to simply enjoy each other’s company with no other distractions or worries of being discovered. A bonus was being surrounded by beautiful works of art that they both love, having the extravagance of being in the museum alone with each other (well, except for the security cameras…) 😉

As a side note…I took a bit of artist’s prerogative by having Gabriel wear a pocket square in Julia’s favorite color. Since he was doing everything possible to gain her favor, I thought it would make a nice little finishing touch to his outfit. Plus, it color-coordinates the two of them, which fits in with the whole prom idea and the white orchid corsage Gabriel surprised Julia with when she arrived at the museum! 😉