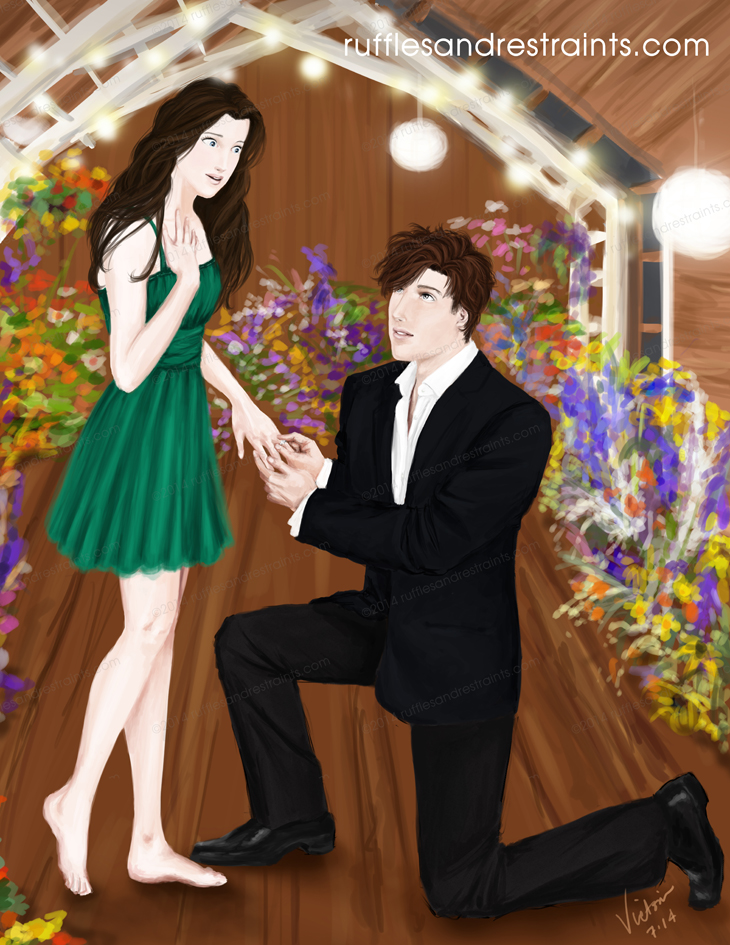 Although the exact date is never indicated in the Fifty Shades of Grey trilogy, July 30 seems to be the approximate date of Christian and Ana’s wedding. So, to celebrate their special day, I decided to create an illo of the moment that made the wedding possible…when Christian proposes to Ana! 😉

The choice of location Christian made for his wedding proposal revealed the changes and emotional growth he had achieved since meeting Ana. In just a short time he had made great strides due to her influence. He could have easily chosen a less personal albeit romantic or picturesque locale. Instead, he chose the boathouse on his parent’s property where he grew up after being adopted by the Greys. Though his life was still a struggle while growing up, the selection of that particular location must’ve held at least some good memories in order for it to be chosen. It also showed a newfound openness by being willing to choose it for such an important event in his life and Ana’s. It is doubtful that Christian invited guests over to his family’s property, let alone be serious enough in a relationship to pick it for the setting for a very important event such as this.

When he met Ana, and they discovered their differences over ‘hearts and flowers,’ the last thing on his mind was to enter into a traditional relationship with a woman. Christian had never been in such a relationship before (although neither had Ana) and he also had no desire to start one up. Or so he thought…

But the fact that he remembered what was once a sticking point between them, seems to show he had not just heard it and dismissed it as something he was not going to entertain. It stuck in his mind due to the fact that Ana had made an impression on him unlike any other woman had before. Even though things were very new and it was still uncertain whether either of them would agree to keep seeing each other, it seems as if Christian was already becoming quite attached to her and considered every facet of their blossoming relationship very carefully and thoroughly. Leave it to Christian to reveal his willingness to enter into the world of ‘hearts and flowers’ in a rather dramatic fashion! 😉

After a tumultuous day filled with surprises and a fair share of drama, it’s most likely that all of it was a distant memory once Christian revealed his surprise for Ana. Earlier in the day, confrontations seemed to be the order of the day, with Kate revealing her discovery, and Elena making a desperate attempt to sustain a past that was already considered ancient history to Christian. Her bold confrontation actually resulted in events which now gave Ana peace of mind that she would no longer be cause for concern. So, in a sense, the events of the day and the boathouse proposal marked a beginning of sorts for Christian and Ana.

…and there is one thing that everyone can agree on…this visit to the boathouse was quite a bit different from the last visit Ana experienced! That is for sure! 😉

26 Responses to hearts and flowers