Another San Diego Comic Con has come and gone, but I took plenty of photos and thought I’d share some of them with you!

I was quite surprised that upon first entering the Con floor, my two male friends suggested we visit the Vintage Books & Anchor Books Booth first so that I could pick up the new Fifty Shades button! I thought that was extremely sweet of them 🙂 Fortunately, when we arrived at the booth, there were plenty for everyone!

My friends and I love going to the Con in order to get inspired by the different artists. I always stop and say hello to Pascal Campion. He’s always so friendly and willing to answer all of my questions. We began discussing perspective in drawings just as someone asked him to sign his newly purchased book. The man asked for a sketch of the Teenage Mutant Ninja Turtles, so Pascal asked if he minded if he also did some perspective drawings of buildings with the figures to show my friend and I his technique! It was so fun to watch him in action! 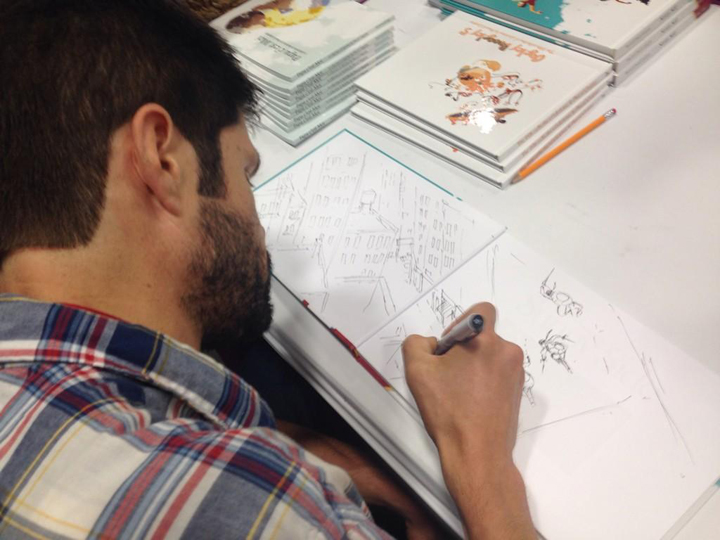 (photo via @pascalcampion which was snapped by his wife!)

…and here’s the finished sketch! 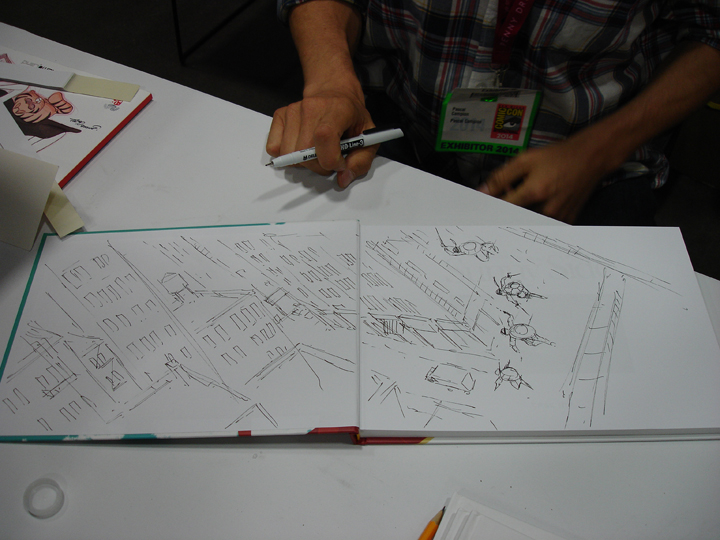 We were impressed that he finished the sketch in just a couple of minutes as he chatted with us the entire time. This was an impromptu piece done with a Sharpie he grabbed, but normally he creates gorgeous color digital pieces. I urge you to check out his wildly successful Kickstarter for his beautiful upcoming book, 3000 Moments.

Even though the Con was incredibly busy, I was fortunate enough to speak at length with several artists that I have admired for so long, including the wonderful Adam Hughes and J Scott Campbell. I got some great advice, and all of them were so generous with their time and so kind. It made me an even bigger fan!

There are always plenty of Cosplayers walking the Con floor, but I have to say that this year I saw some very imaginative costumes, such as… 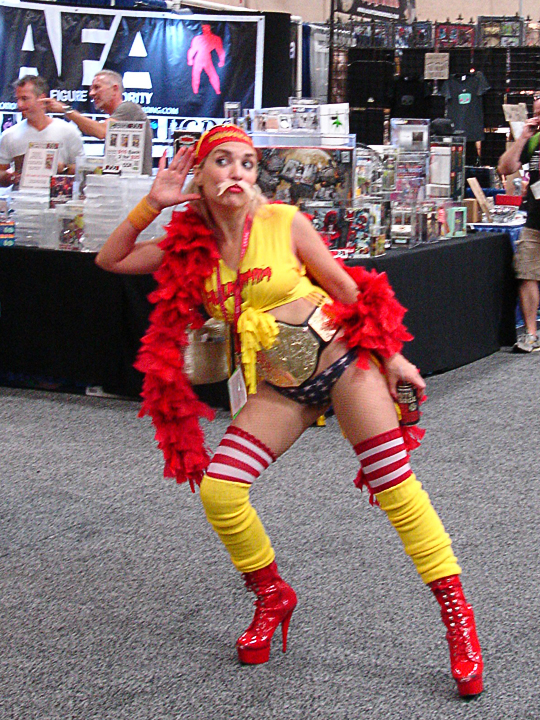 She-Hulk Hogan! (not sure if the name mashup was intentional, but I like to think it was.)

…and then there was… 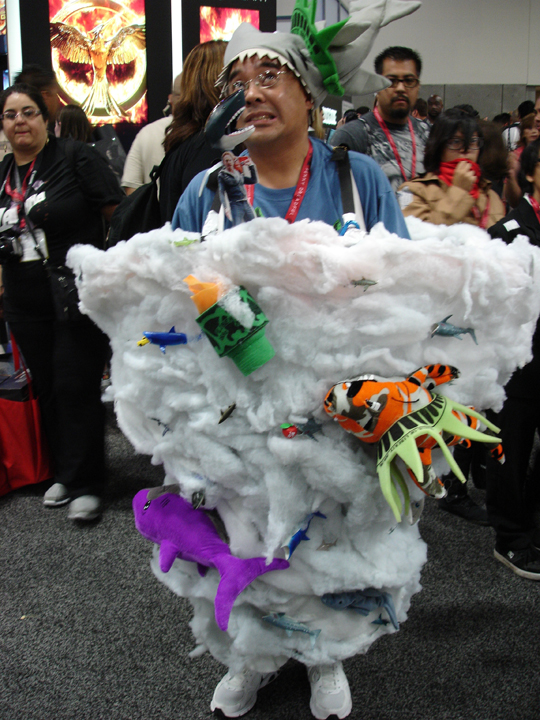 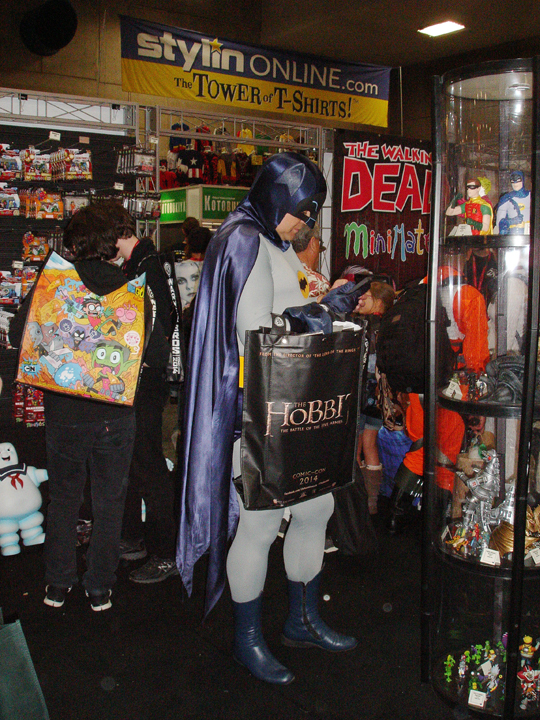 …even Batman must check his smartphone and do a little shopping. 😉

Just outside the Convention Center–near Petco Park–there were more booths and attractions, such as the Adult Swim Funhouse: 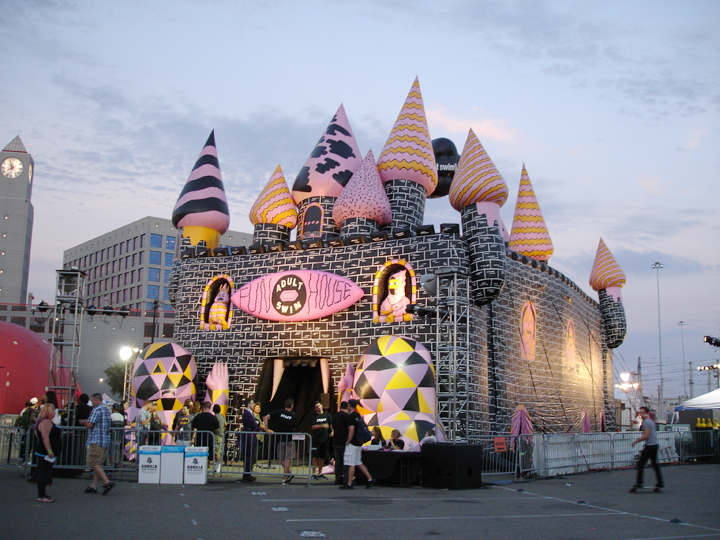 While strolling through, I stumbled upon another great costume near the Sleepy Hollow area: 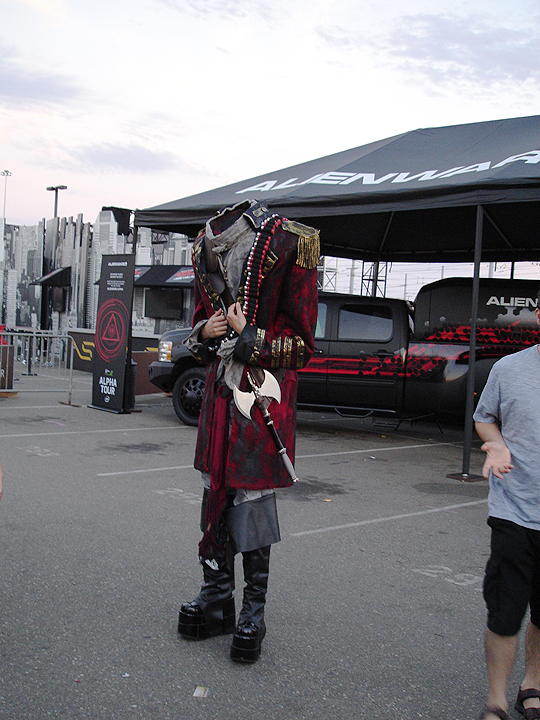 I assumed he was part of the Fox sponsored area, but later I saw him walking to his car with two female friends! He was a Cosplayer in a very impressive costume!

Some booths keep getting more elaborate and enormous every year. Last year The Walking Dead had quite the booth and this year did not disappoint: 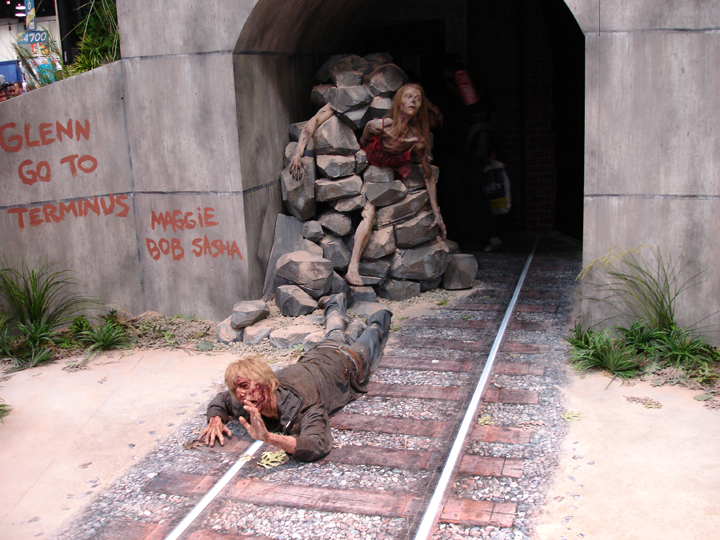 This guy was also enormous! Occasionally he would reveal his large, glowing eyes! 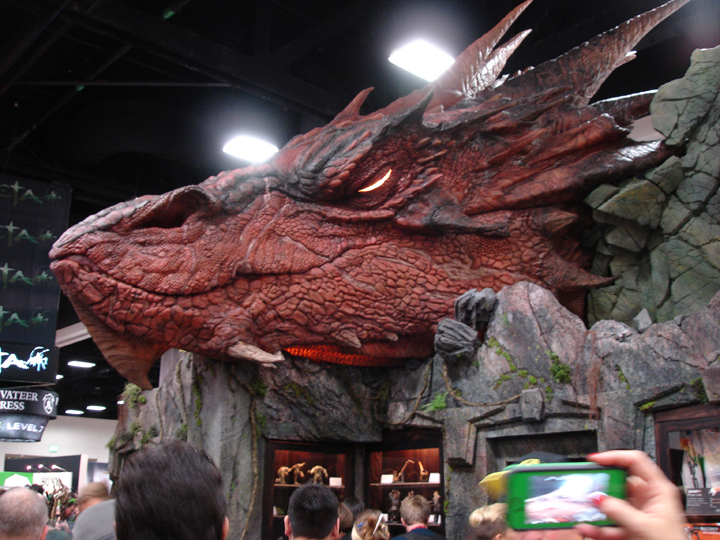 Lego had several impressive things to see, not least of which was this Spider-Man sculpture! 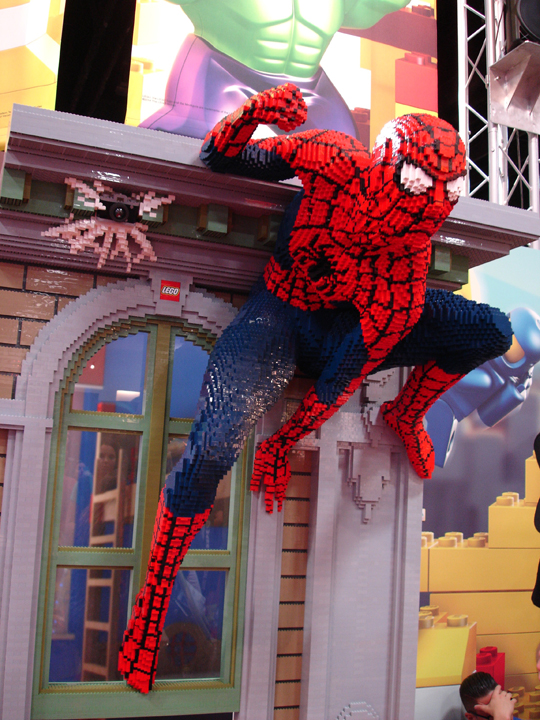 You can always count on seeing lots of Star Wars related items…such as a life-size Han Solo in Carbonite: 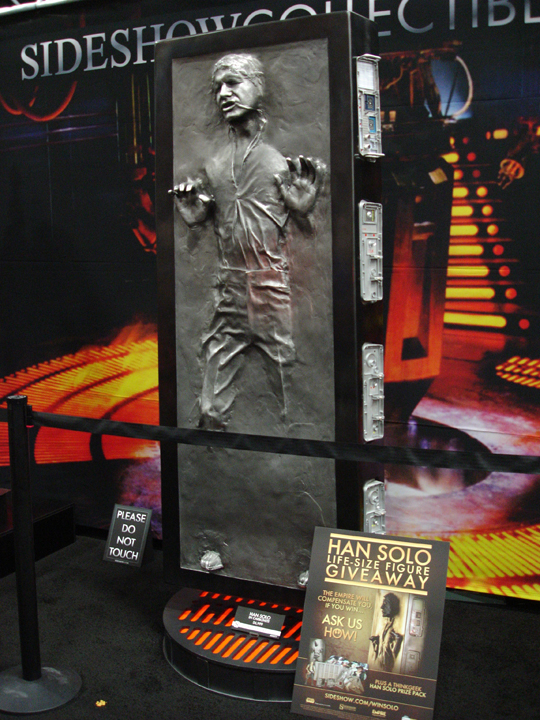 …or a Darth Vader car… 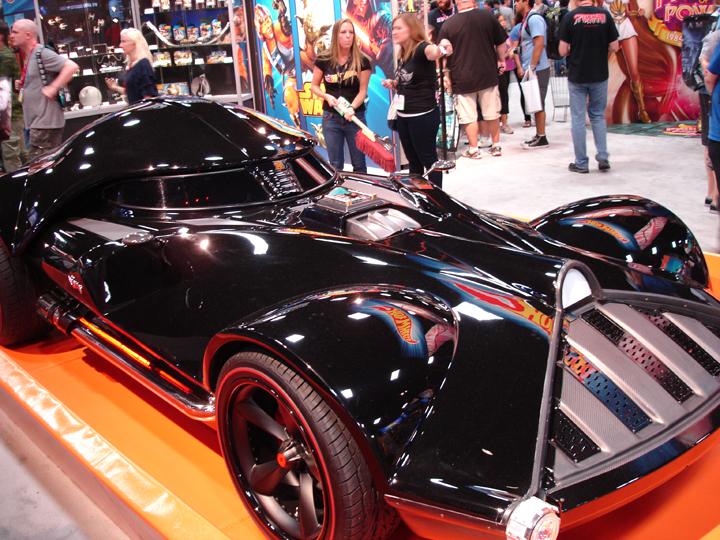 …or a very cute version of Chewbacca… 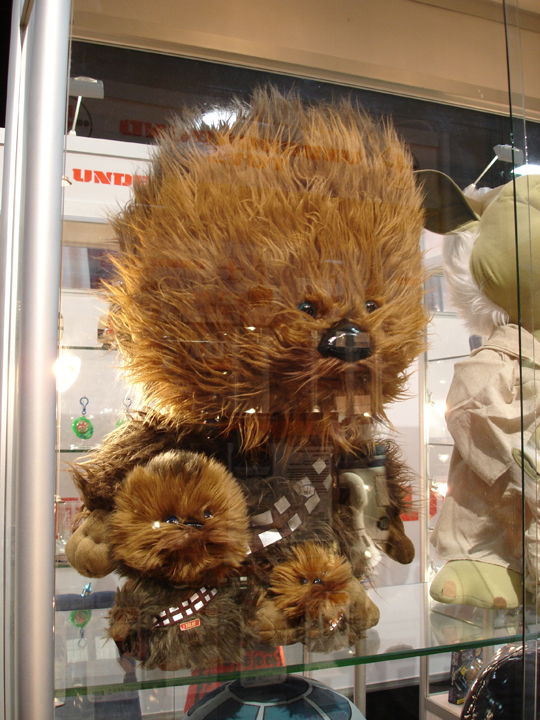 …and hundreds of tiny Stormtroopers! 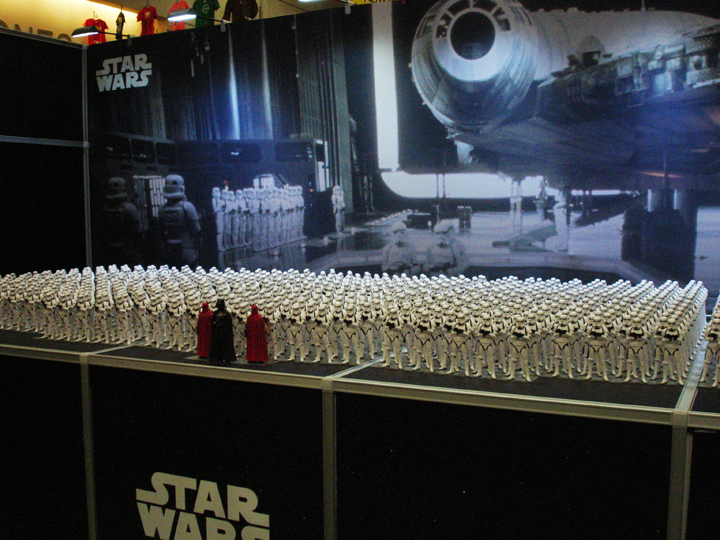 Speaking of tiny, here’s a much smaller version of the Stay Puft Marshmallow Man…both happy…

…and not so happy (accompanied by Slimer!) But either way he’s still cute! 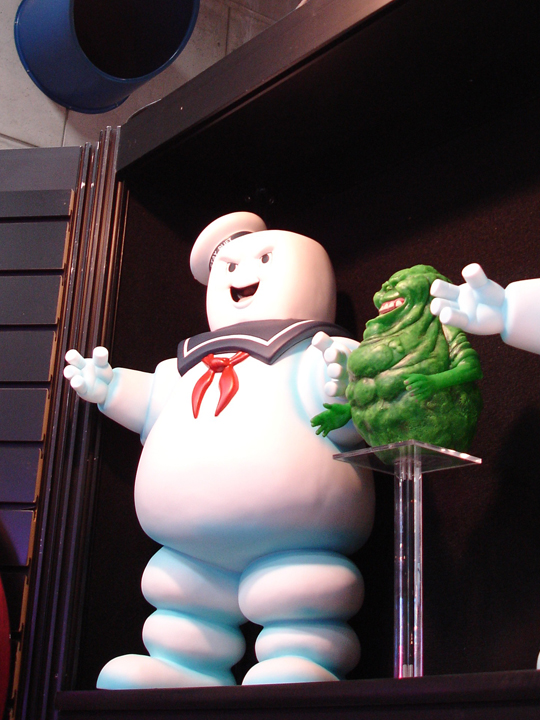 There is never a shortage of cuteness anywhere you looked. How about a combination Uglydoll Icebat dressed as Batman! 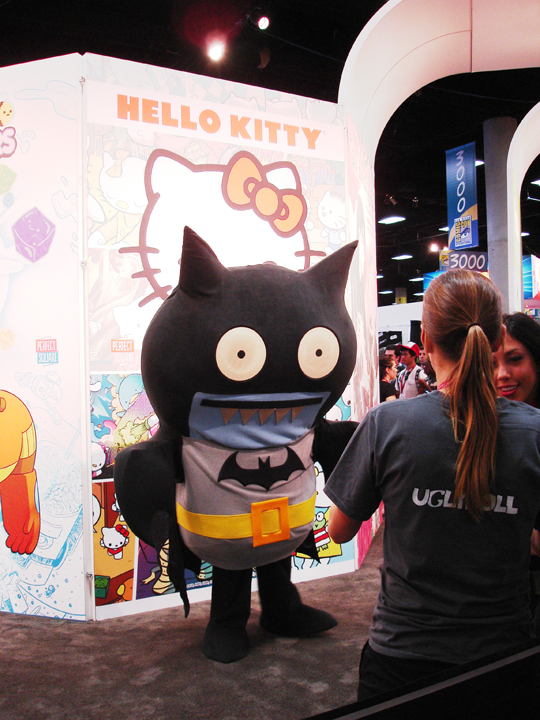 I couldn’t resist taking a photo of this version of Superman on the Uglydoll booth: 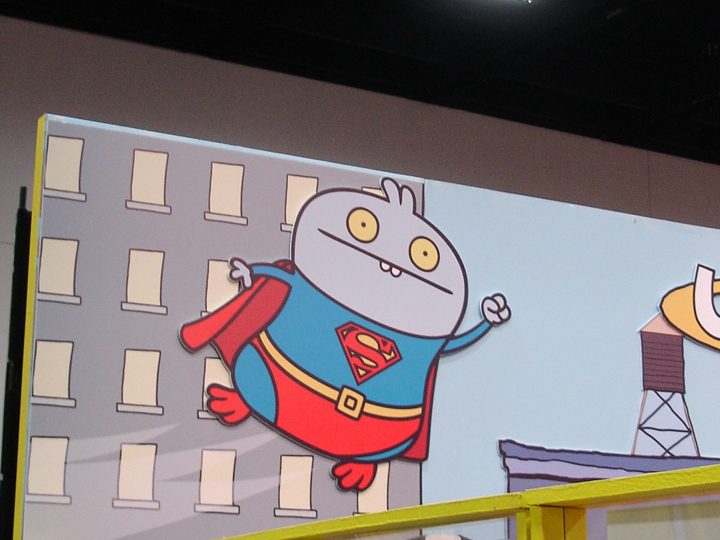 Or a giant Minion! 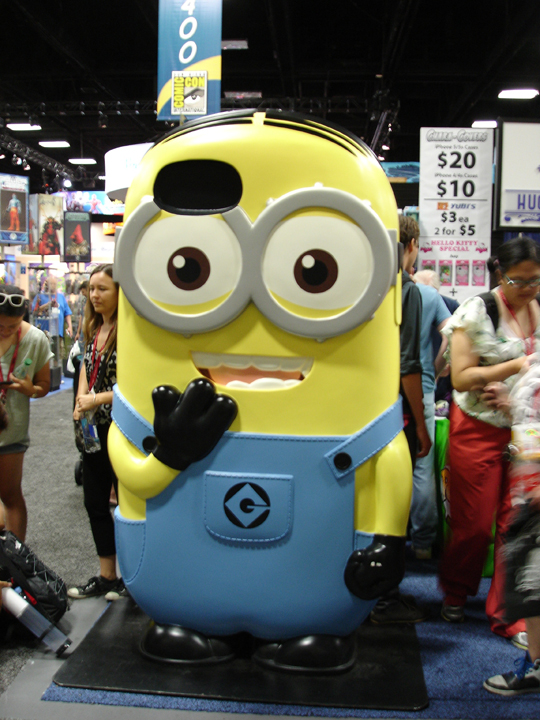 But once again, Snoopy did not disappoint! I was trying to snap a photo just after he posed with a family. As I took aim he noticed me, and began to peek around them as they walked away. He remained in that pose as I snapped my photo! So cute! Just like last year, I made sure to say ‘thank you’ as I waved ‘good bye’ and he gave me a wave back with his paw as I dove back into the crowds.  Snoopy is just the best! 😀 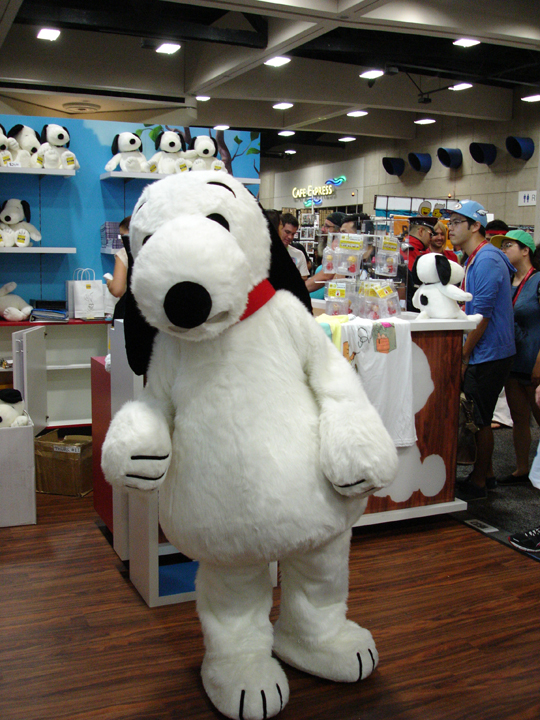 As usual, I had a wonderful time at SDCC and am already looking forward to attending next year! 🙂