the steaks are at stake 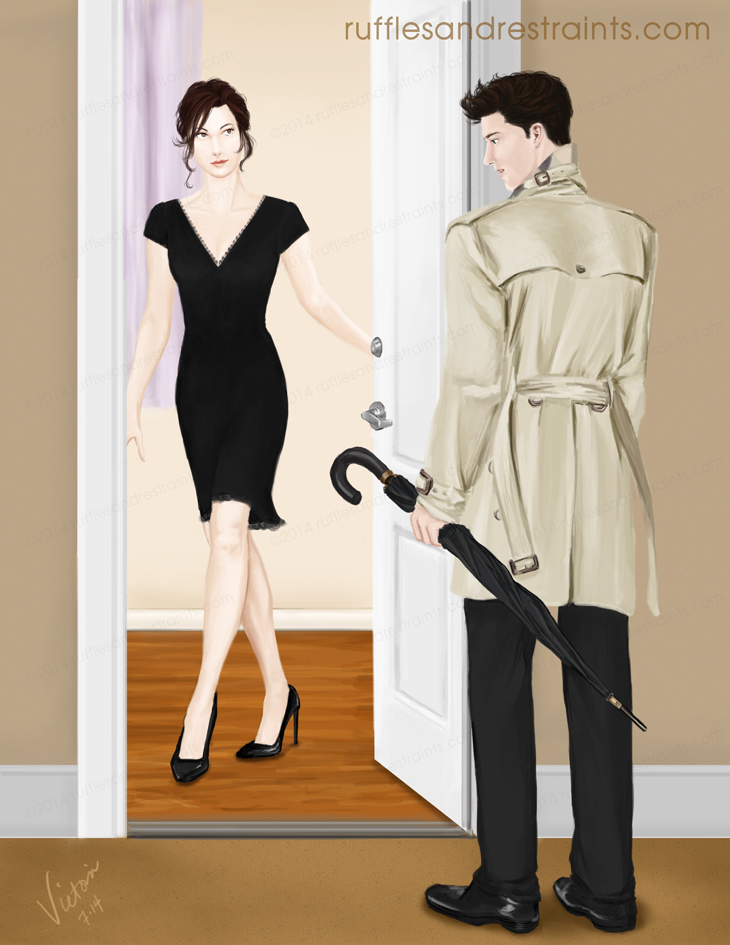 Who knew that the simple act of opening a door could result in so many varied outcomes and have such a profound effect on two people. But in Gabriel’s Inferno by Sylvain Reynard, The Professor and Julia find themselves in just such a situation, and quickly realize that so many things can change in an instant. I thought I’d try depicting one quick moment where Julia’s apartment door features quite prominently, and becomes an unexpected location that leads to a lot of changes in the both of them.

When Julia invited Gabriel inside her tiny apartment, it almost seemed as if her door became some sort of portal or threshold capable of powerful influence. Once the door was opened again, dynamics drastically changed.

Initially–once the two of them entered the very small living quarters– Gabriel continued his usual abrasive treatment of Julia and was judgmental and downright (but unconsciously) rude and insulting to her. But this time it was relentless and quite hurtful, even though she had been nice enough to invite him in for tea. It results in Gabriel making a hasty exit, leaving Julia in tears.

But once he’s out the door, he curiously returns almost immediately. When Gabriel realized what a terrible guest he had been, he exhibited a bit of rare generosity and kindness toward Julia when he extended a dinner invitation to her (although he still managed to insult her when he insinuated that the dress code at the restaurant would be a possible obstacle for her.) Still, his return even surprised Julia. But she also exhibited a surprising change in behavior. Before his quick return she had already broken down into tears. But once he was at her door again, she displayed some boldness.

It seemed as if the moment Julia opened her door to a returning Gabriel, the power dynamic between the two changed dramatically. Julia had become quite assertive and demanded to know why she should accept his invitation. She had no qualms about ending the evening at that instant. While Gabriel was unexpectedly on the defensive, and even resorted to having to sacrifice his expensive Italian shoes to keep her from declining his offer (not to mention having to admit that Paul’s note was accurate!) 😉

Her door is closed again while Julia changes clothes and Gabriel waits in the hall to give her privacy. And yet again–once through the door–Gabriel has another change of heart! So he decides he’ll make his excuses and make yet another hasty retreat. This would ensure that there would no longer be any worries over improprieties with his new student.

However, before he can knock on her door and carry out his exit strategy, Juiia opens the door and ends any doubts about lacking the appropriate attire for dinner! Once she opened her door and Gabriel set his eyes on Julia (and her designer black stilettos) all traces of his plan to keep his career safe by keeping his distance from her virtually evaporated and was quickly forgotten. This time it seemed as if the apartment door was a portal that had opened up into a world of completely different circumstances…and now there was no turning back.

I look forward to finding out what results from the rapid change of events, and if there are any consequences…

20 Responses to the steaks are at stake